I can not define a repeatable crash instruction yet, but it may have something with group copy, move copied group, undo, undo, and then move a part of the original group

In journalctl i see this:

Is there some more metrics i can provide?

Can i run it in some debug mode to help catching the cause better?

OK i start launching it with gdb.

I compile locally, as per https://wiki.mageia.org/en/QElectroTech
Is there something i can do to increase valuable output?

Right now i got a crash in *element* editor while by mouse changing the ovality of an arc, in a element i was modifying (so i have been deleting another arc and spossibly a line in it too, before crash)

I also an hour ago got the crash when saving after having deleted a line that was still visible, like in https://qelectrotech.org/forum/viewtopi … 5081#p5081 that you already know.

would be nice to really track this crash with some debug informations.
From a user point of view only, it's really difficult to define the conditions that make QET crashes.

I use qt creator with gdb for debug and coding.

OK, iĺl try more later.
For now just starting it in gdb and closing by the (x) window button, it catches this:

I have never used Qt Creator...
Is there some way i can compile qet to include debugging information?
(and then just easily run it in gdb)

Anyhow... i installed qt-creator, and opened qelectrotech.pro in the ...trunk folder, started debugging, and as excerise just closed QET  it to get the problem of previous post.  See screenshot below.

EDIT: OH, and there was also this in the Application Output window:
QObject::connect: Cannot queue arguments of type 'QVector<int>'
(Make sure 'QVector<int>' is registered using qRegisterMetaType().)
/EDIT

Do that tell you something?
What would you like me to do now?

Until answered i just try tu use QET as normal - run in debug this way, but i do not know how to get interesting parts when it crashes. 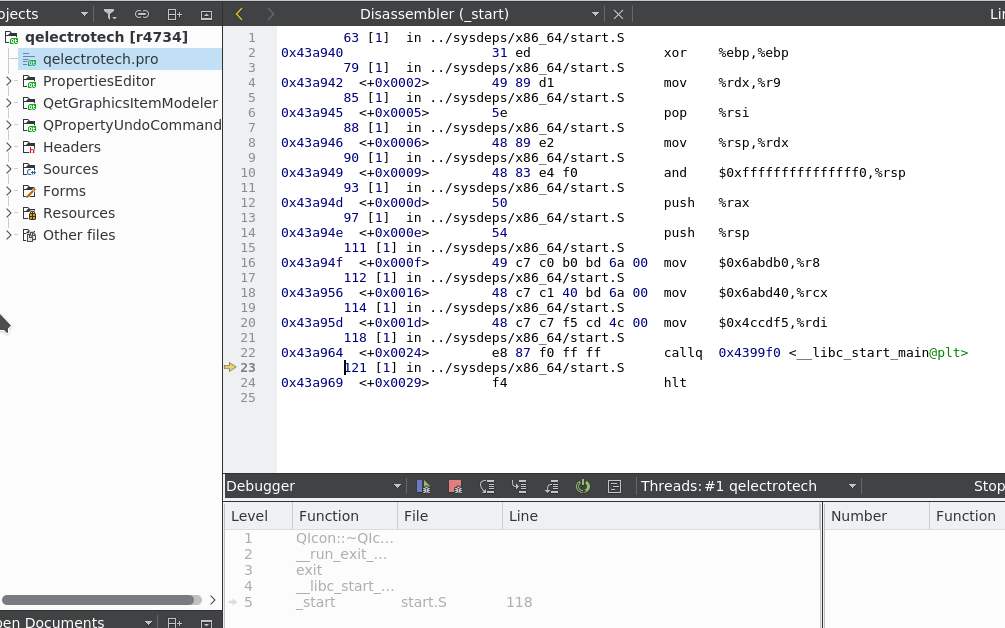 You could run QET in debug with gdb is activated and draw your schemes normalhy.

For having element collection translation, and titleblock you need to adapt path of executable :
https://qelectrotech.org/wiki_new/doc/q … executable 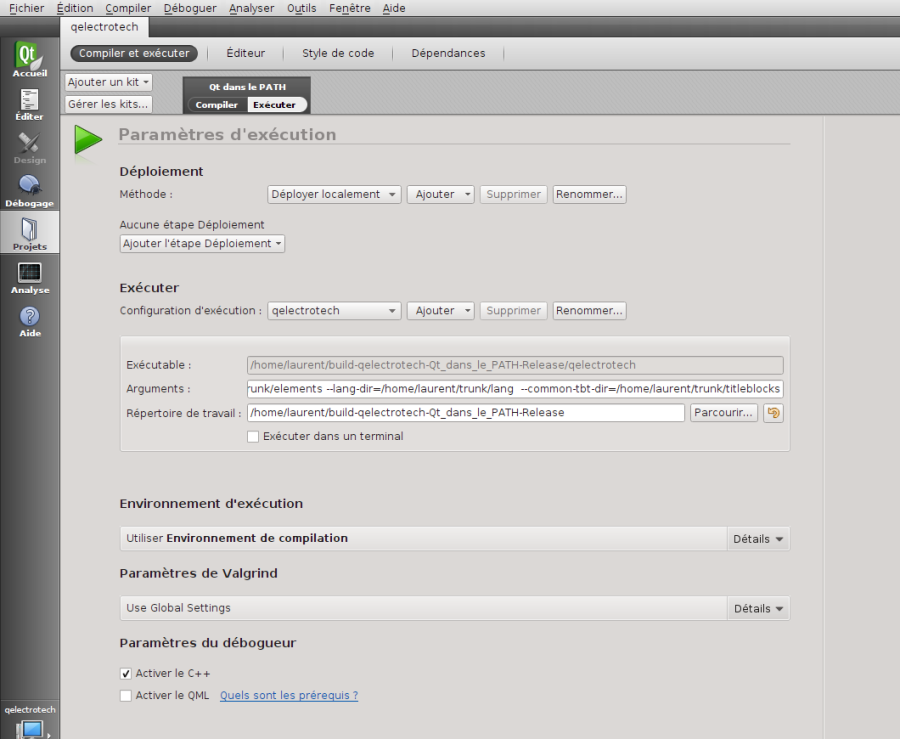 If he crashing you could paste image or text debug info into bugtracker only message linked to source code, like my video.

Now before reading the above post i was using it and the bug triggered: i deleted a conductor and made another conductor, suddenly the deleted conductor was visible again.
I could "select" it so it gets red with blue handles but can not do anything with it.
If i select and move an element the conductor is still shown like selected.
Moving an element on top of conductor deletes that covered part visually.
Then i decided to take a screen-shot, but on screenshot the whole deleted conductor is repainted, looking like normally selected.
I then decided to save the drawing (under new name): crash.

Opening the schematic it is correctly saved; the deleted conductor is not there, and the new conductor drawn after the deletion it there OK.

This may narrow down the problem searching a bit:
Interestingly, the Menu > "File" > "Recently Opened" list do NOT contain the new file.
So it crashed after saving everything to new file, but before updating wherever it stores that list.

Now i will try to make QtCreator debug show source code... (beginning by reading the above

EDIT: Note to self: also installed lib64qt5platformsupport-devel as i saw when started from terminal that QtDesigner was looking for libQt5PlatformSupport.prl  /EDITp, li { white-space: pre-wrap;

While fooling around in the menus i decided to try "Valgrind analyzer with gdb".
In the QtDesigner "Application Output" i then see things like

... and more.  About seven stops before QET is up and ready to use.
Are those issues harmless or problems waiting to happen?

at this point, my knowledge is clearly "out of range"

Maybe a developer could say more about those debug infos.

Not useful : see my video, only errors to Qet source code is useful,  we don't want to debug Qt libraries ..

Yes i have heard others complaining about Qt quality...

I will try to catch bugs with Qet source code.

( I am no programmer of this kind, so do not know much about it... just playing with the tools...) 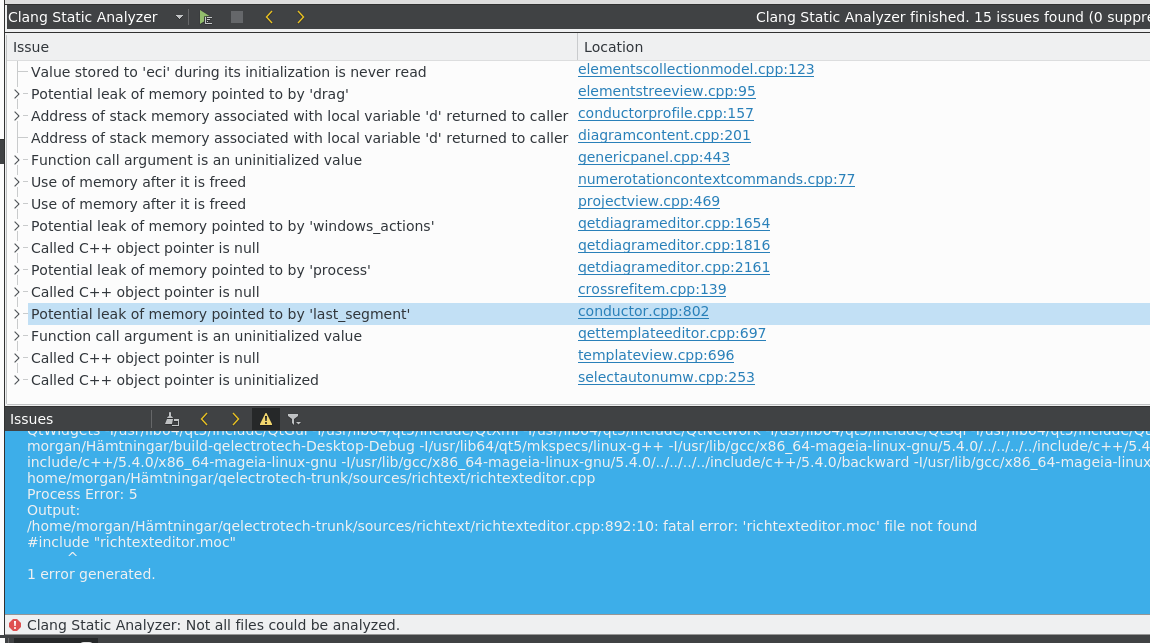 Another crash at saving document after i saw that a conductor did not get properly deleted.
As i see it we have at least two problems

1) something goes wrong in the in-memory drawing

The debugger seem unable to spot 1)

And when crashing i only see dissassembly - not part of Qet source code?

Hooray, i caught a crash: https://qelectrotech.org/bugtracker/view.php?id=98
(a type i have not experienced before, but anyway...)

Hooray, i caught a crash: https://qelectrotech.org/bugtracker/view.php?id=98
(a type i have not experienced before, but anyway...)

Crash fixed with commit N° 4736. Thanks for the report

I am running 4736 in the same way now, will report if anything happens.
Please update Bug 98

A crash when saving
https://qelectrotech.org/bugtracker/view.php?id=100

Crash and other issues when editing an arc * REPEATABLE *
https://qelectrotech.org/bugtracker/view.php?id=101

..and another crash when saving, with debug source screenshot
https://qelectrotech.org/bugtracker/view.php?id=104

Yes i have heard others complaining about Qt quality...

I will try to catch bugs with Qet source code.

( I am no programmer of this kind, so do not know much about it... just playing with the tools...)

I dont know if this is of any help, but this is output in the terminal from where i start Qet and load my schematic:

OK.
The more weird output there is, the harder for bug reporters to know what to report...