..and another crash when saving, with debug source screenshot

Tomorrow i will run 4740 some hour in qtdesigner debug mode

I can still repeat bug 101 completely following my instructions there, for all three variants A,B,C.
https://qelectrotech.org/bugtracker/view.php?id=101
Does it work OK for you?

it was really a nasty bug!

Are developers waiting for some confirmation, or why are the bugs not updated?

Be carefull, this commit can solve this crash, but I'm not sure, because we can't reproduce it every time.

The only thing I'm sure, QUndoCommand is now used as recommended by the Qt documentation, and the part of the source code where I make this change is related with the element/conductor/conductor autonum.

Only long test can say if "yes this bug is fixed".
Twist your fingers and hope this bug is an old story

3) Oops, i forgot to twist my fingers!

See image: at bottom there is a fat black conductor.  I never made it fat.  It was a normal default thin connector.  A while after i had group moved some elements around that conductor, i noticed the conductor right vertical part was touching the dotted oval, so I grabbed that part and dragged it left.

But it did not follow nicely, instead the top part was still sticking out at right like in the picture.  I then deleted it and made a new.  At that time it looked like old one was gone, and only the new one visible (In this screen-shot you see the right vertical part of the new conductor slightly left of the old (fat) ghost conductor.

The old ghost get visible when i select the area.

Then i realised it may be this bug again, saved and yes it crashed.

...And then saves and exports every page, then:

EDIT: that code formatting function in this forum posting is a bit buggy, at least here on current Firefox... /EDIT

EDIT2: That ghost line shows in image exactly like when hoovering mouse over a conductor, but this is without hoovering the mouse over that ghost.  /EDIT2 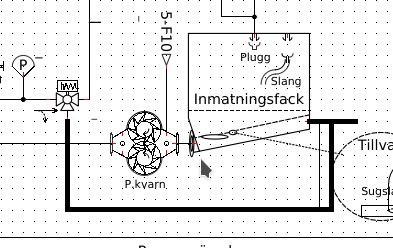 I have been trying to make a repeat instruction but it is not easy.
I found minor repeatable problem though, https://qelectrotech.org/bugtracker/view.php?id=105

Twist your fingers and hope this bug is an old story

I can confirm that the "ghost conductor" bug is not fixed

Yes it would be nice to be able to make a simple and reliable "how to reproduce" procedure the developers can use to track this down.

I am getting closer, but it seem stil rather random...

I caught another kind of crash: when selecting an area
https://qelectrotech.org/bugtracker/view.php?id=106

By this method i can make it crash quickly and repeatable
https://qelectrotech.org/bugtracker/view.php?id=107

I can not reproduce on my PC.
See the attached video.

At the end of the video, look at the really WEIRD BEHAVIOR of the conductor as I move the pump.
I never got that behavior before (conductor becomes sloped)

1) Strange! I repeat it every time, also with slight change in procedure, and also trying to follow you exactly (you use slight different position of valve and deselect conductor before drawing new - also when i do that here it fouls up.  What QET version, Qt, version etc.. do you compile locally?  Other difference?  My system is described @bug 107.

If you find some method to repeat the fault (any file or procedure) i will try here.

2) Regarding the sloped conductor i think it is a variant of bug 105 i reported, and i can repeat that exactly like you on this drawing too.   - could you add a comment and link to this video there please?   This .qet is a sister clone of what i used for that bug.  The pump from where the conductor is slanted is the same home-made .element.  I wonder if there is some oddness about it, like unusual placement of connector?

1)
I always use the last QET devel version (release build from the ppa).
Today the version is svn4751.
Qt version is 5.5.1.
I do not compile localy because I do not have enough knowledge about the compiling stuff.
My system is Ubuntu 16.04 LTS with Unity desktop.

I try to repeat the "ghost conductor" bug for many months now, but I can still not find any method or pattern.

The bug behaves differently on different systems despite using same svn, and same file and procedure.
(i can repeat also on 4751, both standalone compiled and when running in debug mode from QtCreator)

So bug is dependant on build environment and/or where it executes.

If you want to try changing something i can try here immediately to see if it makes a difference.
Maybe there is some optimisations that can be switched off, or forcing to use more rigid but slowing options in compile?
Do it really initialise everything needed, always?
Or you maybe can flip some compile settings?
Or can you put in some kind of trap or logging feature explicitly to trap what happens when I perform the operations that trig the problem i see here when i follow the procedure described in the bug?

Now, I can reporduce this bug around 70% of time with your project morganol.
The first strange thing, is that I can't reproduce bug if I follow your procedus.
But if I select the pump and valve move it and delete it, like I say 70% of time a can reproduce the bug.
Bad news, yesterday I spend around 4 hours and I have no idea where this bug come from. It is very very strange.
In the code, when the bug occur, conductor have no QGraphicsScene, the scene have no Conductor, but something call the method paint of the conducteur and I don't know who call this method.

The only good news, I can now reproduce this bug and it's a big step.

I can now reproduce this bug and it's a big step.

Great.  Much easier to find then, even if I understand it is still hard.

I have not seen that... yet... i think.
You mean when deleting lines, rectangles etc in schema editor, they have happened to become "ghosts"?

You mean when deleting lines, rectangles etc in schema editor, they have happened to become "ghosts"?